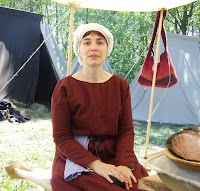 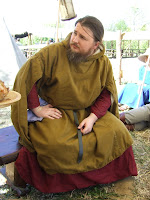 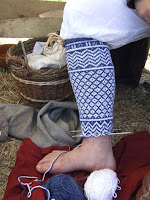 Just a quick post in between two medieval events - X-th Tournament in Ilza dated for the XIII century (photos of myself and Robert above, can you see my naalbinded bag in the background? ^^), and early medieval "Vikings and Slavs" market in Kanie near Warsaw (we hope to visit this event tomorrow).

To Ilza I took the Muslim sock I'm knitting for my friend Lukasz and he got a chance to try one on. I'm very pleased with the result so far, now I'll knit the narrow pattern around the ankle and will try the heel, which is weird and unusual, as if half a heel to knit. I hope it will work. Funny thing though, up till now I've been following the pattern of the sock exactly how it was excavated, so it seems that whoever wore the historical originals, he had exactly the same calves as my friend! ^^