I am the queen of the "let's buy some expensive tool and let's leave it untouched for several months". Yes, I am.
But I'm trying to fight this behavior and that's what I assembled and used last week: 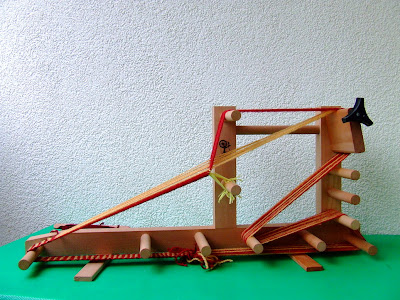 The Ashford Inkle Weaving Loom I bought in Prague in June. *^v^*
This is the first attempt with a simple wool band, a short one just to get the hang of the weaving on this loom. I like this heddle weaving-without a heddle, because there is no wooden heddle here, just some pieces of string that play its role.
Next I'm going to try to weave a tablet band, I saw people doing this (on photos on the Web), and I hope it would help me a lot (heddle weaving is easy without the loom, tablet weaving is more difficult, at least for me). 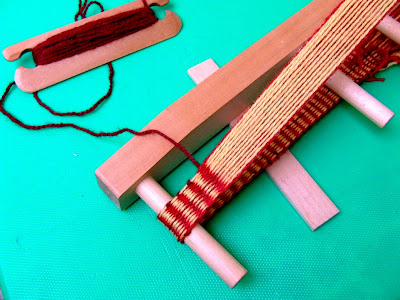 This loom is very comfortable to use, it's small (but efficient, it says I can weave an over 3 m band on it!), light and easy to warp and use. I wish it was period for my Viking events, but unfortunately it was invented in the XIXth century, so it won't accompany me while I'm at the historic meetings. But at least I have a great tool to use at home! *^v^*

I also gave Shrinky Dinks a try (a present from Myriam, yikes! *^v^*).
I couldn't decide what to choose so I just picked three simple drawings from the Gimp brushes and voila! 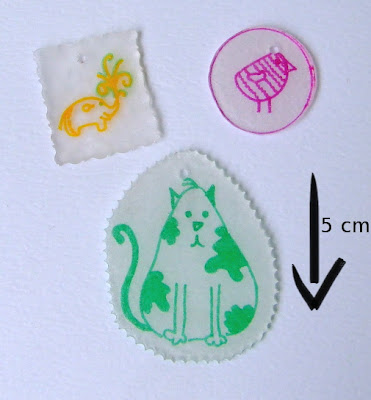 They turned out quite small, the biggest being 5 cm, but now I know how much they can shrink and I can plan some new designs according to that. Still, the cat can be turned into a necklace and the other two - into earrings! ^^
I cannot believe you've had such a great toy since the 70's in the US, whereas we haven't!

During the weekend I also finished two paintings (still not varnished, I'm waiting for the art supplies order to arrive) and I knitted Tangled Yoke Cardi - the body's been finished and waiting for the sleeves, the sleeves are half-way done. It takes me really quick to knit this cardigan, but it must be the motivation awaiting me - the cable on the yoke! =^v^=