My shawl had a mishap...

And I'm not talking about the cut across it, because I've done that myself, on purpose.
It all was going quite well from the beginning - okay, I lost several stitches on the edges but it was more or less even, and then, (just where I marked it with a blue line) - a disaster!... I suddenly lost a lot of stitches and it started to look really akward. I don't know what happened - maybe I just watched some interesting movie and didn't concentrate enough on the naalbinding in my hands... Anyway, I tried to patch it up, adding more stitches in the reds and oranges, planning to add stitches in the dark reds and browns later, but then I thought that it wouldn't do.
So, I took my scissors and solved the problem in a brutal way. *sigh* (No, I did't think about unwinding all the stitches back to the brown row!...)

(terrible flash photo not showing the purples and maroons properly...)

I'm going to sew the small bit of naalbinded fabric into a purse and felt it, and I'll try to continue the shawl properly counting the stitches and not loosing them again! ^^
Which means, I'm probably not going to wear it on Saturday, during the battle event we are attending (I'll definitely take pictures and have some pictures taken of myself in my Viking outfit, girls! ^^).

And have I told you what I got as a birthday present from my friend, who owns a printing company? ^^
He printed two of my photos in a huge format on a special rubber paper, so my husband decided to frame them and put them on our living-room wall... 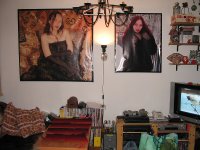 Not that we have space for such big pictures, and I thought they would be overwhelming in such a small room (even half a room, the other half is a kitchen...), but apart from the fact that I look at myself all day (*^O^*) they really fit nicely. I may change them into posters with other views but similar in size, now when I know how such huge pictures fit. ^^
Posted by Brahdelt at Thursday, November 23, 2006