Do you remember my Whiplash prize - the skein of funky pink&black yarn called "Punk Rock" I got from Natasha Fialkov, to be exact? ^^
I decided to knit something out of it last night and I made these:

These are my new crazy wristwarmers! *^v^*
I cast on 20 sts, the pattern was [k2, p2], and then I added one row of a crocheted fringe 2 sts into 1 st. To finish off, I decided to add a metal D-ring and some decorations I made.
And I still have some of the yarn left, most probably I'll make a cordout of it, embelish it somehow and use it as a belt. ^^

And last weekend I worked on this:

This is the Winter hat I'm going to use for my Viking events - once a month off season we attend staged battles and even during the Winter months we have to be dressed properly from the historical point of view. I have one hat already, but it's a Spring/Autumn hat as I call it, because it's rather small and not very warm. This one is made of thick wool, with a linnen lining, and some fur around the brim. I also embroidered it freehand a bit, using linnen threads and small pieces of mother-of-pearl.

And do you know the Andersen's fairytale called "Cat in boots"?
This is my local version: 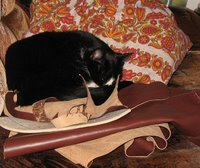 *^v^*
This is my Barbi curled upon the new medieval Russian boots my husband was making for himself over the weekend... ^^
Posted by Brahdelt at Wednesday, November 22, 2006