Have you ever tried one of the great Polish dishes called beetroot soup, or red barszcz? 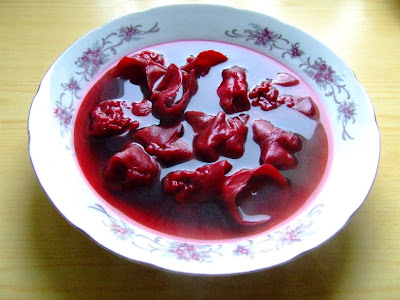 Traditionally it's rather complicated, because first you have to prepare something called zakwas, which is a mixture of sliced beetroots, vinegar and spices, let it sit for some time (for several days) and later you add water and cook the soup itself. My father makes red barszcz this way, although I must confess I buy the ready made one... ^^

You usually eat red barszcz with a small type of pierogi (ravioli), called uszka (little ears). They can have different stuffing but the most traditional are with meat or cabbage and wild mushrooms. The ones in the picture were made by myself last night! *^v^*

Because I noticed that many foreigners pronounce the name of this soup in a Russian way (borshch), let me teach you the correct Polish pronunciation of the word "barszcz" - you start with the sound of long [a:], like in a word "bar", then you follow with two consonant sounds [sh] and [ch], but harder than you usually say it.
Barszcz = ['ba:rshch] 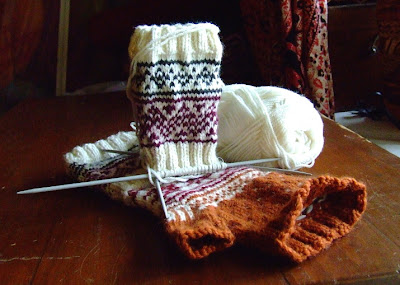 I'm finishing the third pair of wristwarmers, this time inspired by two charts from the book by Toshiyuki Shimada with Norwegian patterns. They may go into the "next Christmas presents" drawer, because these are not really my colours and they are a bit tight in the thumb part, so they need somebody with smaller hands, like my aunt, for example! *^v^*

Next time - it will definitely be mittens or gloves!
In addition to pattern links sent to me by Helene I also received a great source of Latvian mittens from Michelle (bardzo dziękuje!!!), check this out: Latvian mittens! I was speechless when I looked through this site, there are no charts but knitted items, a real feast for the eye!


Art Journaling
Last, but not least, my finished journal pages. I'm very busy nowadays finishing some new products for the on-line gallery so I don't work in my art journal as often as I'd like to (not to mention painting, it must change!), so only two new spreads, but new ones are coming! *^v^*

This is the page for the prompt by d'Blogala from the previous Friday, Wishes & Dreams. 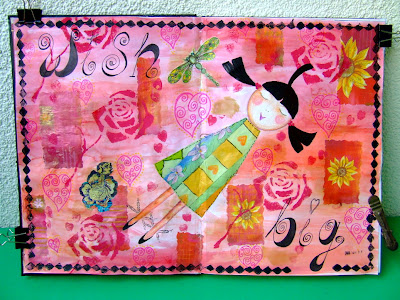 This one is an old IF prompt - Horizon. 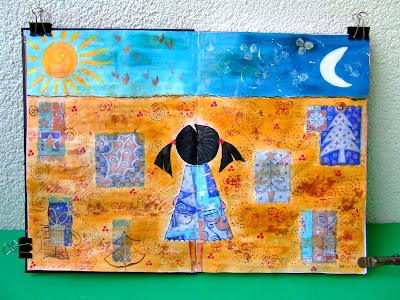 Email ThisBlogThis!Share to TwitterShare to FacebookShare to Pinterest
Labels: art journaling, knitting, Straight from the Cauldron