Thank you all for complementing my Snow White shawl (*^-^*). I'm already thinking about the next lacy project, it's addictive!

So, we had a wonderful weather yesterday and we went for a picnic! ^^
First, there was like million people on the bus - because it was the first sunny free day, and all Warsaw inhabitants (those that didn't leave the town for a prolonged weekend) decided to go to Powsin Park and spend the day outside... So after some time in a crowd, with old ladies moaning and standing in a big traffic jam we decided it would be faster to leave on the next stop and go on foot for the rest of the way (which was a good idea, because we passed the bus that was left in a traffic jam...). 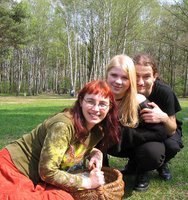 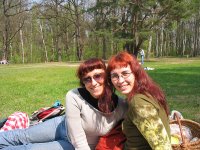 It's me, Anna and Gabriel. And here it's Caroline and me again! ^^

We found ourselves a nice piece of a lawn, had lunch outdoors - Chinese honey-and-soya ribs (ribs - how convenient for a knitter to eat! ^^I wonder whether they were 1x1 ribs, or maybe 2x2 ribs, because each of us got two of them...), a salad, hard-boiled eggs, cucumbers, and some biscuits (and because it was a public place - pretending it was a blackberry juice, not the red wine we were having...^^), and then we played petanque (my team lost twice...)! ^^ And then we had some ice-cream. 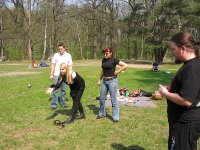 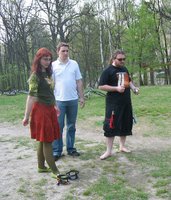 Playing petanque:
Peter, Anna, Caroline and my husband Robert. Me, Peter and Robert.

We came home strolling through the forest and it was a really nice day. In the evening our friends came over and we made spaghetti Bolognese for dinner and played Scrabble.
Late night I was soooo tired with the fresh air, games and wine ^^, that I was sound asleep when I barely put a cheek on the pillow!

Who can guess what this is? 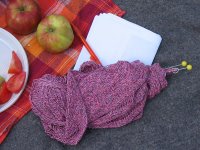 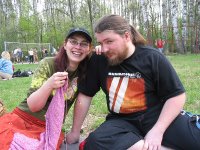