Shrinking and other stuff

Okay, so my first words after I took my bag out from the washing machine were:
"OMG, it got sooooo tiny!... "

Of course, it didn't get soooo tiny, It just shrunk, which is normal. ^^

Now I know that if I wanted to have the felteg bag of the previous size, I would have to knit an enormous one, wow! It has a funny texture, like it had a very very short perm, just like this animal I don't remember the name, but women sometimes wear fur coats made of their furs - it's got very short curly hair (it's probably the result of the garter stitch, stockinette would have felted differently, am I right?).
It's still wet so I won't be attaching handles and finishing it today, moreover I've got some ideas of how to adorn it, so expect photos of the finished bag a bit later.

Change of subject:
I've been doing lots of embroidery this week. As you know we (my husband and I, and our friends) are historical reenactors (Viking and Rus, X-XII c.), and we sew our medieval clothing and spend some weekens at the events like Medieval Markets both in Poland and abroad (we've been doing it for almost 14 years now, wow! ^^). In two weeks time we are going for a first such event this season and we are preparing new sets of clothing.
My husband sewn himself a caftan (Rus jacket) and I'm making the embroidered bands for this caftan - I finished cuffs and working on the rest (4 more metres to make!...).
Here is the design I created based on the medieval Russian patterns:

And here that's how it looks like on the finished garment:

I chose the shade of maroon a bit darker than the linnen background and I think it looks nice when only just peeking out of the lighter base, when the white gives a strong statement.

And I'm sewing a new dress for myself out of maroon linnen, and I'm making the bands for it on a coral linnen with the following desing:

Yesterday I also knitted a sock - we need socks for our medieval outfits, and the only technique we can be sure the people used at that time was naalbinding - it's something between crocheting and knitting, when you use long pieces of yarn and a thick sewing needle, and you tie the knots that cannot be frogged when the needle is removed (not like in crocheting or knitting). For me this technique is rather complicated - my husband said he will sit and learn it properly, but until then we need socks of simple desing and plain stitches, so I used Arachne's Sock Calculator and created the pattern for a short sock for my foot measurements (it's not perfect so I had to make adjustments on the way, but at least I had a base fo the pattern), and I knitted it last night using only stockinette stitches. Of course it curls at the top... But on the other hand it's very short (reaching my ankle) so it doesn't matter so much, and when I put a shoe on it won't be noticeable at all. I'm going to try and knit another sock, this time longer, starting with several rows of garter stitches, and starting with less st to make it a bit tighter, so I'll show you both socks later.

Shopping
I've been doing on-line shopping last week and my orders arrived! ^^
First, on Monday I recieved a parcel full of books (including two Haruki Murakami's novels, I love his writing!) and I got this: 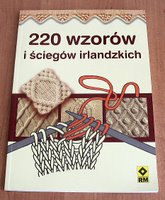 And it goes on and on, from very simple cables to very complicated sets of patterns, I love it and I hope I'll find time to try it out soon! 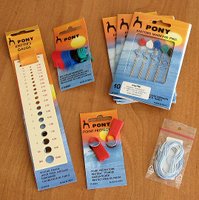 Finally I am fully equipped! I have the knitter's gauge, marking pins, plastic markers for smaller and biggers sizes of needles and two point protectors. And they also sent me a sample of the Altin Basak MIYA yarn (Turkish) - very soft cotton, I believe, but if they send out samples, they should pick the amount I could swatch with, I think...