Was creating till I dropped...

Yes, exactly! I didn't go anywhere, because I felt too ill to decide on spending three days and two nights in a tent. And I was partly right, because my friends reported they had beautiful sun on Saturday, but: rain on Friday, rain during the nights, heavy wind all the time, fairly nice weather on Sunday.
And I spent those days at home, doing lots of things but not leaving at all- and we had huge thunderstorms on Friday and Saturday evenings.
Well, since I promised you the pictures of what I've been doing recently, here they are:

First, there is a povoinik - the medieval Russian cap, embroidered at the front: 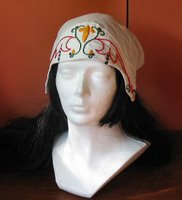 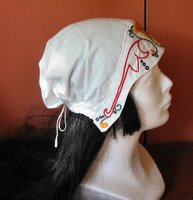 Here is a veil worn over the povoinik - it's a 2-metre long and 50 cm wide piece of light cotton, embroidered at the end (this end is worn in such a way that it stays on the shoulder to show the embroidery). It should be wrapped around the head and neck to hide the hair. 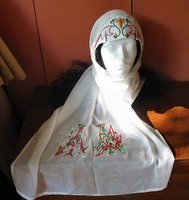 (close-up on the pattern)

Here is the last piece of this puzzle - ubrus, that is a triangular piece of fabric that is pinned to a cap. It should be heavily embroidered (it will be!) but I only managed to hem it with red linnen thread before last week's event. 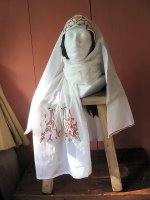 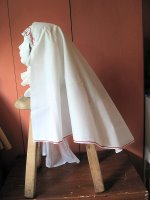 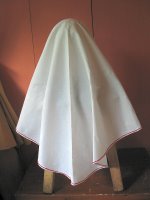 Then, I finished a three-panel skirt called panova, each panel is made of wool, lined with linnen, and embroidered. It should be worn as a second layer over the chemise called rubacha. 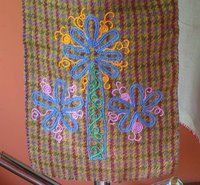 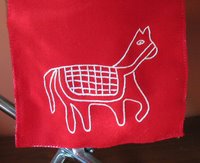 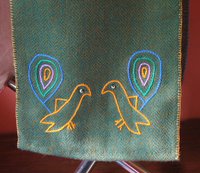 There is also my husband's caftan, I still have to make the embroidered band for the lower hem and the cords to fasten it at the front.

Kimberly wanted to see why I bought the leather - here you are: two pairs of leather shoes sewn by my husband, the black ones are mine (pattern after the shoes from XI c. found in Staraja Ladoga in Russia), 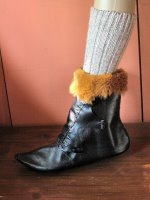 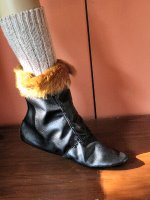 the dark brown ones are his (pattern after the X c. shoes found in Hedeby in Germany): 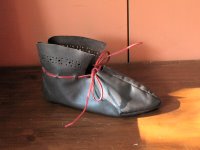 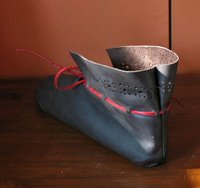 I also knitted, of course! ^^
My Clapotis is growing, I finished some socks (nothing fancy, very simple stockinette for our medieval events - orange is Robert's, red is mine): 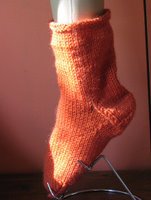 And I started the bag for Tote Exchange KAL: 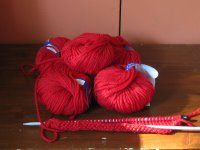 I am still in a haze of making things, so more photos soon, especially because I bought some wool that I believe is a self-striping one (the seller probably had no idea what she was selling...), so I expect to knit nice socks with it! ^^
Happy knitting!
Posted by Brahdelt at Tuesday, May 23, 2006