Let me present you a pair of trousers my Robert invented, designed from scartch and sewn for himself (finishing on Sunday)!!! ^^
It's black thick cotton with lots of straps, metal rings and pockets here and there, and he initially made them for a planned cyber gothic party, but we skipped the party for now and he wore the trousers yesterday to work. ^^

And now for something completely different, a book meme! *^v^*
I don't know whether it's been already launched over the blogs, if not I'm starting it now: list 5 books that played an important role in your childhood and explain why. Then tag 5 people to do this. ^^
My 5 books are (in no particular order, as Bruce Forsythe would say... ^^):

There are many books about the Moomins but this one was specially dear to me. I love Autumn and November is not that bad a month as it may seem. ^^ I loved the atmosphere created in this book, when I read about the cold rainy and windy day when Fillyfjonk balanced on the wet windowsill trying to clean the windows, and the Snuffkin who prepared himself to leave the Valley before Winter, and their crazy party in Moomins house without the hosts present, the scarry Groke in the dark Woods... (yes, I know, I was a strange child, call me Joanna The Strange ^^). I still have the piece of paper where I put down many somehow interesting/appealing to me sentences from this book, and I will come back to this book over and over again.

Lewis Carroll "Alice in Wonderland"
I haven't read the second part, "Through the Looking Glass", untill much later, when I was about 20 and bought the English version of both parts. But "Alice..." was with me from early childhood, first in the form of a record played by my father and the bizarre Russian film on tv based on the story, then there was a book. I knew it by heart and still I was reading it over and over again. I loved the fact that all her adventures happened in her dreams and imagination, or did they really? ^^ Since I always lived in the world of my imagination I didn't want to know the true answer to that question. 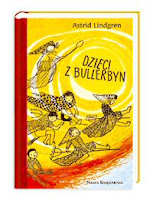 Astrid Lindgren "Children of Noissy Village"
I also read "The Pippi Longstocking" but this one was my favourite (Pippi was too independent and crazy for me at that time, now my husband says that she is probably my role model, but maybe in fashion, I'm not that brave and adventurous as she is! ^^). I admired the inventive games they all played everyday and I think it was my substitute for being with other children. Although deep down in my heart I wanted to be surrounded by a group of friends, I was scared to meet new people, so I stayed at home and read about friends playing together instead. Psychoterapy needed! ^^

Maria Kruger "Karolcia"
Now, the Polish author. Mrs.Kruger wrote two books about the adventures of a 7 year old girl named Karolcia (Caroline) - in the first part she had a blue bead that granted her wishes just for a day, in the second part - it was a blue crayon and she could draw whatever she wanted to have. I loved these imagination games, and the fact, that none of the adults could see the things Karolcia created with the help of a bead or a crayon. And she wasn't selfish in her wishes, they were always important things brought into this reality to help somebody, ect. I remember I was carrying with me a blue crayon for some time and imagined I was drawing things that can become real! *^v^*

A.A. Milne "Winnie the Pooh"
Okay, it was obvious that this book couldn't be left out from my list. Everytime I read this book I imagined I was there with them, in the Woods, I even had my imaginary house in one of the big trees. ^^ I could spend hours playing "Winnie the Pooh" with all the characters cut out from some animal magazines or drawn by myself, I invented new stories with my roles, of course. ^^


Okay, here are my childhood books, and now I'd like to tag the following ladies: Alice, Vera, Kendra, Erica and Yuki. *^v^*
Posted by Brahdelt at Tuesday, February 06, 2007

Email ThisBlogThis!Share to TwitterShare to FacebookShare to Pinterest
Labels: books