My weekend outfits: Saturday trip to a craft supplies wholesaler and dinner at Robert's Mom's, and Sunday - visit to my best friend Anna's where we took some photos of the new corsets Robert sewn for our gothic shop (he planned a whole haute couture line, made three for now and one went to Anna ^^). 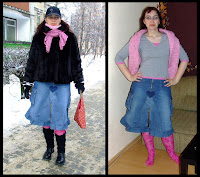 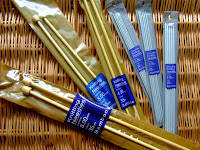 On Saturday, as I mentioned, I've been doing some shopping at a craft supplies wholesaler, and among other things I bought these incredibly cheap knitting needles in the following sizes (I'm so going back there for more - 50 cents for dpns, about 80 cents for straight ones! Especially if the bamboo needles prove to be nice to work with. ^^): 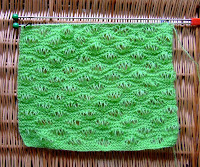 And I've done some progress on my Morning Surf scarf for my mother's birthday (which is 25th March, so I still have go a lot of time). It's much lighter than my shawl (only single thread involved and 3 mm needles instead of 4 mm).

I've been also thinking about the next shawl for Beltane: I think I'll try either Print'o'the Wave by Eunny or Gerda Stole by Kendra but I have a problem with both patterns: they are charted and I don't like knitting from a chart... I may always rewrite them into the row-by-row instructions then. We'll see! ^^

And now I'm off to sewing - I'm also making corsets for Atelier this week! ^^
Posted by Brahdelt at Monday, February 12, 2007