First things first, replies to my commentators from yesterday ^^:

Rho, my hair is dark red indeed, it was a black wig! *^v^* I sometimes wear wigs just for fun, or for pictures. I believe Polish for you sounds like, for example, Hungarian of Finnish for me - I'm totally lost with these two!

Kendra, it will be some time before these pieces are finished! ^^ But I'm very excited about this new concept and I put away other things for now, so I hope it won't be long before I can show you the final result. I think I should include the audio files with pronunciation of these words, it would make the pieces complete in a way. I'll think about it! *^v^* 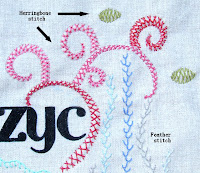 Okay, yesterday I managed to embroider the first panel with the word "to create". For now I used the following stitches: herringbone, buttonhole, feather and fly, and I'll be adding the other stitches from the previous TAST weeks soon, as well as other simple stitches.
I am generally very excited, I totally forgot how great it is to sit with a needle in one hand and a piece of cloth in the other and 'paint' the picture with colourful threads! ^^ And, to be honest, I've never tasted the pleasure of freehand embroidery like the one I'm making right now, I always embroidered some picture, so I had to stick to the outlines and colours, not to mention the cross-stitching, where following the scheme is all that counts! Maybe that's why I'm a bit shy with adding any new elements to my panels (like aplique, ect), but I hope to warm up and do it at some stage! *^v^*

I already have more ideas for the next pieces (three at least), but I'm holding back because I don't want to stay with many WIPs. My first tryptych is my priority now, and anyway I've run out of a transfer paper which is neccessary for the next projects ^^, so for now I'll be a good girl and continue my first idea. 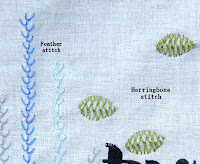 Robert carefully examined my embroidery last night (he was thinking about using those stitches to decorate our medieval clothing but I believe they were invented much later, apart from a buttonhole stitch), and asked whether I was making a sampler. I thought about it and the answer was "no, it's not a sampler", because I had in mind the traditional sampler, with neat rows of different stitches one after another but then it occurred to me that it is a sampler in some way. Which led me to the idea of making my own stitch sampler book with pieces of fabric and

examples of the stitches with all their possible variations. I have some sheets of handmade paper which can be good for a base notebook and all I need is to learn bookbinding! Piece of cake! *^v^*

I found this very helpful site with video instructions for many stitches: Needle'n'Thread. If you are, like myself, the person who best learns not from a description but from watching the process itself, this is the place to go for stitch instructions! ^^
Posted by Brahdelt at Wednesday, February 21, 2007