Thank you very much for your yesterday's comments on my illness, after several doses of a medicine I'm feeling better today and keep staying under the blanket. ^^

I cannot do much physical work so I've been thinking about a lot of stuff and such thing came to my mind: 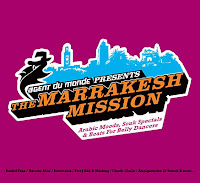 Do you remember the Ally McBeal Show and the idea of songs that lead its characters throughout their lives? Inspiring songs, cozy songs, energetic songs, songs full of good memories, songs giving strength to live another day.

I decided to choose the theme song for this year and I've already found one that is just perfect for it - the band is called The Eastenders (yes, I know, I love this BBC series, too *^v^*), and the song is 'On the Ride'". It is in Turkish, has a very nice rhytmic tune and here is its description from the editor's site: 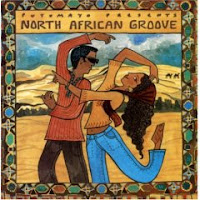 The Pan-Arabic North African Groove closes out with the multiculti Eastenders. On their song 'On the Ride' the German and Turkish duo collaborate with singer Shady Sheha, a young Egyptian who lives in Wiesbaden, Germany. The songs says,

'Get up and come with us
Let’s play and see the world
Don’t think about who you are
Or where you come from
We all share the same path
Which doesn’t seem to have an end.'

It can be found on several albums, for example Agent du Monde 'Marrakesh Mission' or Putumayo 'North African Groove'.
Do you have such theme songs in your lives? ^^

Knitting
Let's play a game - look at the picture and find six details that are somehow wrong: 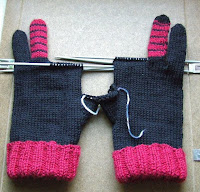 Yes, you're right, six fingers are missing. Why? Because I ran out of yarn...

I thought I had enough but it turned out that I was mistaken. Yesterday when I went out to get my medicine I checked my LYS and found out that they don't have neither this red yarn nor the black one anymore. I have at home the same yarn in light blue and ecru, but none of them seem to fit here (maybe the ecru one would be okay but I don't want to have three white fingers, I'd have to wash my gloves very often).
It looks like next week I'll be hunting down for the same/similar yarn all over the town. Not to mention that I'll be doing this with my hands unprotected from the cold! Well...
Posted by Brahdelt at Tuesday, January 09, 2007