What's wrong with the weather?... 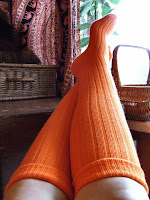 I checked the weather forecast for the next week and I'm stunned...
There still will be no snow at all, but a lot of raining, and the temperatures are going to rise from 6 degrees Celsius as it is today up to 11-12 degrees Celsius. Where is Winter, I'd like to ask? (whoever I may ask about that...) Days are dull and grey and wet, very depressing... I decided to compensate this with colourful clothing, we'll see how it works! *^v^*
(these socks are not knitted by me, but I liked them anyway!)

This morning Robert got up early and went for a training meeting of our medieval group and I stayed at home because I didn't feel fine (some cold and cough doesn't want to leave me for some time now). So, I decided to start my day with some nice breakfast and reading. ^^

So, there is a bowl of the wholewheat cereal with candied fruit and a cup of Twinnings Mango&Passionfruit tea, and my Haruki Murakami, of course, which I finished this morning. (Some people say that it's rude to read while eating but what do they know?... *^v^* It's something I've been doing my whole life and I'm not going to stop never ever!)
This is Murakami's "South of the Border, West of the Sun" - the simple story that could happen to me and you - there is a boy and his childhood beloved, then a teenager and his lover, then a man and his wife and children, and suddenly his past comes back to him in an unexpected way, very true and well written.

I was also surprised to find out that Polish translations of Murakami's books are being done from the English versions, not from the Japanese ones... Which makes me wander about the 'lost in translation' flavours of the stories, that are filtered not only once (JP-PL) but twice (JP-ENG-PL). I still love these books, though.
And I've just went to my on-line bookstore to check something and found out that at the end of January another Murakami's novel will be available - "Kafka on the Shore"! Ureshiiiii! ~\*^O^*/~ 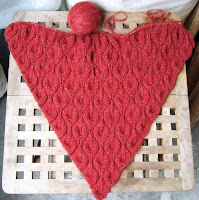 whether it's time to stop knitting. I know it will grow after washing and blocking, but I'm not sure how much bigger it will get. Well, I think I'll just work till the end of the skein (I had a 100g skein and I used a little more than half of it up till now) and then I'll try to imagine if that's the right size. ^^
I haven't been knitting Emelia because I could not find the proper environment to concentrate on the charts and that's obligatory for this pattern, but I'll finish it this week. I also decided that I desperately need a pair of mittens - since I can knit them myself I don't want to buy some ready-made acrylic ones, but on the other hand I postponed making them for so long that Winter came and even without a frost it's quite cold outside, so expect me to whip up some simple mittens soon, before I'll knit the beautiful Norwegian gloves I had planned last year from the famous Japanese pattern book many bloggers bought (I may have money for the yarn in the second half of January).
Still no yukata to show you, becauase Robert was making a pair of Japanese hakama pants yesterday for a friend and spent the whole day on it. (It's rather easy to make it patternwise but there is a lot of fabric handling and pleating, 5 metres of fabric, to be exact. ^^) And he broke all the machine needles except for the last one nr 100, which is very thick. Must go needle shopping tomorrow!
And this morning the stray cat came again to my balcony, Barbi of course went mad and I had to expel the kitty immediately, so she went on neighbours' balcony and tried to get inside through their glass doors, no result, I'm afraid. I wish the owner wouldn't let her go around the blocks so much. 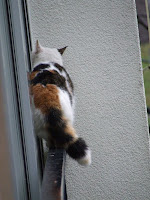 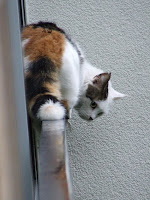 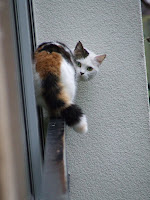 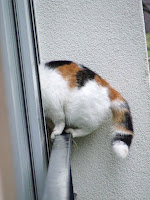