... knitting gloves is so complicated, so many separate fingers!...
Five, to be exact. ^^ But it's still a lot and the next Fair Isle I'm knitting is a pair of socks! One tube and not a one separate toe! *^v^*
I've been also considering Fair Isle gloves as Christmas gifts for my family, but I think I'll stick with mittens, one finger I can cope with.

Here is the first of the two Norwegian gloves (not that easy to photograph your right hand with a camera in your left hand...) - it's soft and very warm, I almost dream about Winter weather wearing it! It fits like a glove ^^, and there is the other one to knit (Although it's not as complicated as I thought last year, when I bought the book. But after the Mamluke socks nothing in two colours would be complicated for me! *^v^*). 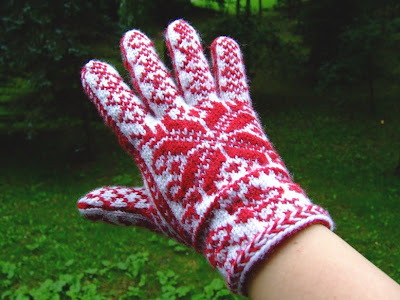 As I've been asked a couple of times recently about yarn shops in Warsaw I decided to make a list for you, foreign visitors, with some other tips as well and some language instructions.

First of all, when you shop in small LYS placed in the bazaars you probably won't meet an English speaking seller, but they will be helpful and yarn often speaks for itself. ^^ You will find a good selection of Polish and Turkish yarns, also some Italian yarns in bigger shops and sometimes (but rarely) sock yarn - I found Regia in my LYS, but no Opal of Trekking. It will be also difficult to find more luxuries yarns like silk, but there is a wide variety of wool, cotton, viscose, acrylics and remixes of them all.

Shops:
- I usually buy yarn at my LYS, which is in Mokotow district, this is the bazaar shop and I'm not sure they speak English there but they are very friendly and helpful! You can touch every skein of yarn and you will get a discount if you buy several skeins. It's at the big bazaar on the corner of Puławska street and Aleja Lotników.
- there are two shops in the big shopping malls, one in Galeria Mokotów
(http://www.galeriamokotow.pl/, Mokotów district, Wołoska street, 1st floor), the other in Blue City (http://www.bluecity.pl/en/, Ochota district, Jerozolimskie Alley, ground floor, mainly Italian yarns)
- there is a good shop at Świętokrzyska street, just next to the Świętokrzyska subway (city centre)
- there are two wholesalers I know of, one in Praga district at Mińska street - it's called Pasgala, the other one in Żoliborz district at Włościańska street called Agmako. I haven't been to the second one yet, I hope to visit this place next week. 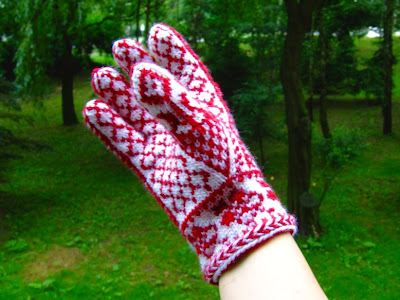 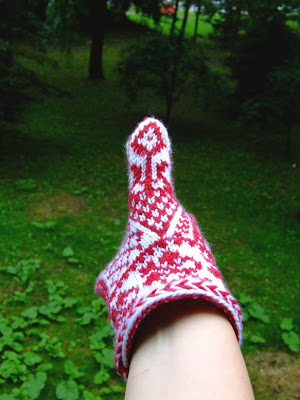 BTW, I changed the template of my blog, I like the way the photos are presented in this one. ^^
Posted by Brahdelt at Wednesday, July 04, 2007