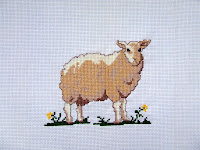 Everybody's doing it, so I decided that I would also like to have my own One-Year-And-A-Month-Blogging-Anniversary giveaway! The prize will be a cross-stitch picture of a sheep (who would have thought?... *^v^*) and some additional surprises.
What to do to take part in it? Just leave a comment on this post between today and the 11th April, and on April 12th I'll draw a winner (from my husband's wedding tophat! *^v^*).

Last night I finished the Morning Surf scarf for my mother and I decided that I had enough of this pattern for a while, so now I'll be off to something new, maybe cables? I have an urge to frog the sweater I bought some time ago in a thrift shop (just for the yarn, but then I wanted to wear it so it stayed with me in his original form, but now I'm having a change of heart again... ^^) and turn it into a cabled shawl. We'll see about that. 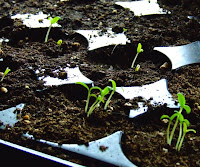 No pictures of what crafts I've been doing lately because... I'm still working on them today. ^^ I hope tomorrow I''ll finish everything and I'll be able to show you the results, and tomorrow I will also write about the new Spring collection of Gudrun Sjoden's (I got the catalog last night).
For now my growing tomatoes! *^v^*
I don't expect to harvest the tomatoes any time soon, but they started above the ground and it's a reason for me to be happy!

And last, but not least, especially for my husband's request, the photos of the cats we met at the cottage last weekend (near the shop and on our porch - neighbour's cats). There was one more cat, the black one, but we didn't take a good shot of him. 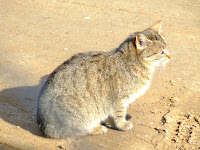 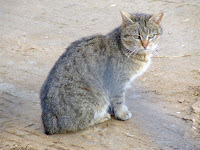 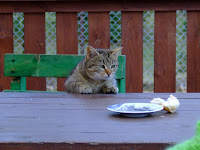 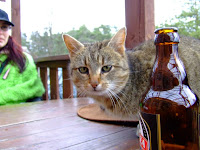 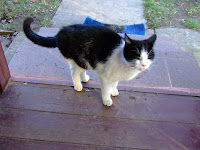