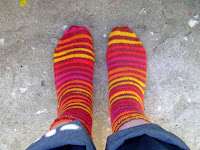 Well, it seems that those two doesn't match, either... I don't know why, I started both of them right with the beginning of a new ball of yarn, so I assumed they would knit up the same, I had no idea skeins are printed randomly. Next time I'll be wiser to check it.
Anyway, that's the result and that's what I'm going to wear, period. ^^

I'm finishing the second anklet and then I think I'll try to finish the poor Emelia which is on my needles since October (remember my musings about not leaving the project on the needles for too long? Here I go again... I hope this time I won't mess up the stitches because there won't be the third attempt!...)

Have you got your favourite chef?
I love cooking and I love watching culinary programmes on BBC Prime, and recently also on Kitchen TV, and my favourite chefs are the following: Anthony Worral Thompson, Rick Stein, Ainsley Harriott and number one - Jamie Oliver! His cooking is so simple but refined, and I've started to watch his recent series "Jamie at home", where he cooks at his parent's house, and the first episode was about the potatoes. So, for Sunday lunch we had "Roasted chicken thighs with potatoes and tomatoes". *^v^* Delicious, it was gone in a moment, and I forgot to take a photo (but I will next time...), but I'd like to share the recipe with you because it's so simple but oh so tasty! ^^
(it's my version written down while watching tv)

Roasted chicken thighs with potatoes and tomatoes (serves 4)
- remove the bones from 8 chicken thighs, cut them into halves, fry them in the pan on a hot oil for about 15 minutes with the skin sides down, season with salt
- cook 1 kg of small potatoes, drain them and put them onto the baking tray
- peel the skins off of 1 kg of small tomatoes, add them to the potatoes
- put the chicken thighs on the backing tray together with potatoes and tomatoes
- make a dressing: mix well some olive oil, chopped fresh oregano leaves, a splash of white wine vinegar, salt and pepper, pour it over the backing tray and stir everything so everything is well coated with the dressing
- add some more olive oil and oregano leaves on top
- put it in the oven for about 30 minutes in 180 Celsjus
- serves with rocket salad splashed with some lemon juice, olive oil and balsamic vinegar
Yummy! *^v^*
Posted by Brahdelt at Monday, March 26, 2007