I'm having a small nervous breakdown today. You can skip this part and go straight to the knitting content below.

I so hate the place where we live...
It's very small (hallway-kitchen-diner in one plus bedroom-office-craftroom in one, 42 square meters).
It hasn't been properly renovated for over 20 years so you can imagine the state of the kitchen and bathroom... (we did some renovation on the bathroom when we moved in about 7 years ago but it needs a thorough redecoration).
It's on the ground floor, with a cold beaming from the basement (permanently cold floors), with millions of trees on one side blocking the light, and millions of people walking in front of our windows on the other.
It's close to the main door to the building and almost opposite the lift, so there are legions of people marching in and out, opening and shutting doors, with yapping dogs, kids shouting, ect, all day long.
It's not ours, but Robert's mother's, so we cannot just sell it and move somewhere else.
And now - not far from our balcony there is a small building and there used to be a grocery shop, but now somebody bought it and decided to install there games machines/flippers/whatever you call them, and there is a sign saying "Open 24 hours". How about that?...

I know people live in worse conditions, and I sympathize with them truly, and I don't know why it all just struck me today - a beautiful sunny not too cold day like this - but I feel down about our living space. Yes, we are planning to take a big renovation credit sometime in February or March 2008 and radically redecorate the whole flat, but it won't change the location, it won't change the size, the ground floor.
I so wish we could start somewhere new, the place we would choose and that would please us both. And yes, we could probably afford a two bedroom flat somewhere on the very far outskirts of Warsaw, with a 40 or 50 year mortgage...
I'm just not happy here.
(I'm sorry, I had to vent it somewhere, and Robert is already sick of listening to my ranting about it.)

Knitting
The new issue of Ulla, the Finnish knitting magazine is on and there are several great patterns to make, for cardigans, socks and gloves, and first of all, beautiful designs by Tuulia. Oh, I wish I knew Finnish!
Anyway, I bookmarked some of the patterns and I'll try to decipher them or at least be inspired by the pretty cables and colors! Tuulia, thank you for your offer of help in translating the patterns! *^v^* 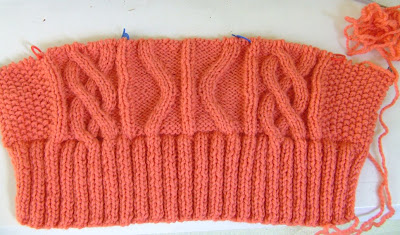 I'm knitting my coral cardigan according to the design from Sandra Oct'07, but I've changed the pattern a bit - I don't like bobbles so I'll skip them and knit the stockinette or pearl stitch instead. I may also knit it a bit longer than the original. I named my cardi - Lucy - in honor of the cardigan Lucy Liu wore in the movie Lucky Number Slevin. It's knitting up fairly quickly (6 mm needles), but I wonder whether I have enough yarn for the whole sweater, it seems to magically disappear (one out of 10 balls is already in this piece)... I may have to skip the hood, we'll see.
I also have the Secret of Chrysopolis Stole on the needles (and didn't add much since the last time I showed you the photo), and I thought I'd start the Secret of the Stole stole last Friday, but... after seeing some photos of the finished hint 1 I'm not so sure I like it. There is a lot of a stole and not much of a lace in it, just several single holes here and there. I'll wait and see what's it going to look like after the second clue this Friday. Even if it's not for me (a Christmas gift for some woman in the family), I don't want to knit and give something I don't like, it wouldn't be fair.

Painting
Thank you so much for all the nice words about my painting for Anna, she liked it a lot and I really appreciate your positive comments! (I think I need them so much because I didn't get them when I was a child...).
Anyway, I've been working on some new paintings, one of which is a surprise for somebody so I'll show it to you later. *^v^*


Have you seen this movie - Big Fish? I highly recommend it. It tells the story of a man with so much determination that he lives his life the way he really wants, he makes choices and sticks to them. The story about the man who perceives his life as a fairytale and it becomes one! ^^
And there's cute Ewan McGregor and Jessica Lange, and Helena Bonham Carter (all my favorites ^^), and many more.
Posted by Brahdelt at Wednesday, October 10, 2007

Email ThisBlogThis!Share to TwitterShare to FacebookShare to Pinterest
Labels: knitting