Funny thing, I haven't received any new Postcard Swap Pal in June and I thought that maybe Lolly forgot to include me in this month's swap, but today I opened my letterbox and look, what I got: 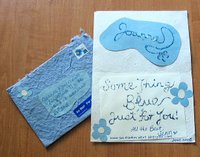 Beautiful blue postcard from Jenn (my May PS Pal)! Don't tell anyone, but I am starting to like blue colour!... ^^
I may not get a new PS Pal this month but it's always nice to exchange the cards with the old pals, right? *^v^* Jenn, I'm sending you my blu card tomorrow!

Inspired by the beautiful tissue holders made by Stephanie, I decided to give it a try and make one for myself. I dug through my fabric stash and here is the result:

But I'm not telling you how I did it, because Stephanie sells her tissue holders and I don't want to reveal her workshop secrets. This one I figured out and made for my own use only.

I started the July assignment for Bag Me KAL - we could choose two out of three bags, and ... I wanted to tell you that I cast on for Striped Self LinedBag, but in fact last night, during the Switzerland - Ukraine soccer game I almost finished it! ^^
Okay, it was a full match, then a playoff, and then the penalty kicks, so it lasted longer than usually.
I'm knitting the handles now and thinking about the embelishments. And I'll be felting this one (it's not felted in the original pattern - felting is the new black for me! ^^) 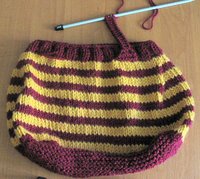 I also cast on for the Wristwarmers of Chaos, and I'll see how I can deal with this idea for this strange yarn...

I shouldn't buy new yarn since we have no money this month for any extra spendings, so of course I went for yarn shopping today!...
Well, okay, I planned to buy the wool for those gorgeous gloves from the Japanese book some time ago, so it was justified. 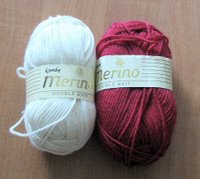 But, when I saw these colours I couldn't resist, and they are soooo soft (50% wool, 50% acrylic), it's Spanish yarn called Katia Mexico, and they were laying there lonely, only two of them among other one-colour balls of yarn... ^^

I believe I know what to knit with it, but I'll share it with you later! ^^