So, April officially started and all the things orange and yellow appeared on many blogs! (*^-^*)
Here is my first April collage, and expect more to come because I have lots of orange things (clothes, accessories, items), not many yellow ones though because I look terrible in this colour... 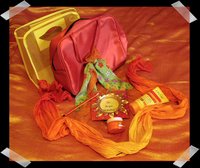 I've done some cleaning in my wardrobe and found two jumpers I want to frog and reuse! ^^ One is a mustard colour long-sleeve jumper, very plain, knitted long time ago by my mother, it has a very interesting yarn - mercerised cotton with very small felted balls several centimeters apart. The second one is a big Winter jumper made of a very thick white wool, but it was done for a person with some serious body disproportions!... ^^ It is very wide, like size of a tall big bossomed woman, but the sleves are narrow and very short!...
So, these two are going to be frogged and turned into something else - the mustard one will probably end up as a bell-sleeved jumper with wide boatneck, and the white one will be the same only for my body proportions. Look forward to pictures of the process! ^^

BTW, I thought things through and finally decided to give up Hindu dancing classes.
The teacher is not okay, I don't have time to practice the moves at home to be able to manage during the classes, after each lesson I felt that I failed - not only didn't learn anything but also was a burden to a teacher who wanted to introduce new steps and couldn't because we were too slow to grasp the idea (I know I wasn't the only one; in fact, most of the group looked puzlled all the time, but still...). Now I want to concentrate on bellydance classes, master the steps and raise my level of fitness, and in September I want to try different teacher and start classic Hindu dancing. Maybe it's running away, maybe I should try harder and force myself to continue but it doesn't bring me any fun at all, only frustration!... ><
Posted by Brahdelt at Tuesday, April 04, 2006