Three days passed and I am back home! ^^
My Swedish trip lasted for a very short time, but it was fun! I spent lots of time knitting, while being on a train or, like here, on a ferry! ^^ 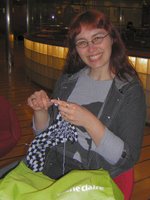 I wanted to have with me some simple knitting project that would occupy mainly my hands, not my head, so I took my checkered scarf. And look how it grew - 65 cms! (*^-^*) I still need to knit 2/3 of the length but taking into account that it is my for-the-next-Winter-project, it goes really fast. I can feel I passed this mysterious point from where your knitting grows faster than before, if you know what I mean. ^^

The weather was rather windy and wet, but fortunately not very cold (like when I was there in December - photo in red Winter coat for reference! >< ). Can you see the pink coif I knitted? Not the best photo, I know. I decided not to embroider it, at least for now, so it can be regarded as finished. 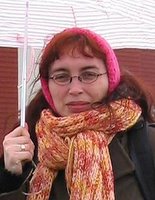 This gentleman greeted us in front of one of the pubs!... ^^ 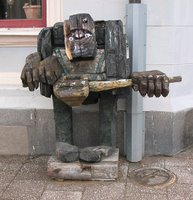 As you know I wanted to visit knitting shops in Karlskrona and I found two addresses on the Web, so I went to those two places. I got really dissappointed, I must admit... "BLEKINGE HEMSLÃ–JD" turned out to be folk crafts shop next to Blekinge region museum, and "Cikoria" was closed, but what I saw through big shopwindows were different fabrics and not even one ball of yarn. Well... I found one more craft shop, rather poorly stocked with yarns, no stitching markers I hoped for but I bought two pairs of needles. Size 4 (US 6), because I needed them and my old 4s were of a very poor quality, and size 20 (US 35), because I found some interesting project for such enormous needles! ^^

I laso tried to find some pattern books, but all I found were two books - "Knitting for little babies" (I don't have any...) and "Scarves" (about 10-12 scarf patterns, but not very impressive). Both were very expensive hard-covers, at least for my pocket. And there are no knitting magazines in Sweden, strange... 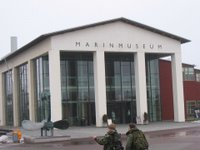 In the Marine Museum we visited I found something very interesting - namely XVII-th c. marine looms used by the sailors to weave very strong belts needed on the ships. 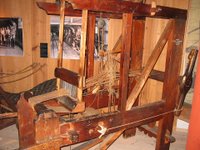 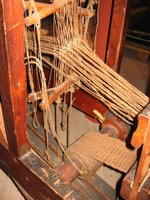 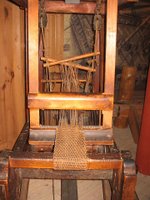 In the Museum I also got inspired for the new corset pattern. I want to design an Elisabethan-like corset based on the armour worn by the galeon lady below: 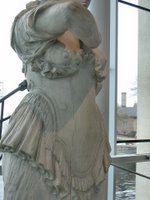 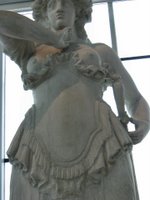 We also had fun winning the ferry lottery (bottles of wine and Carolina Herrera 212 perfume!... ^-^), eating kotbullars (meatballs) with potatoes and cranberries, buying lots of apple cider to take home with us. I am a bit fed up with Karlskrona for now because I've been there several times so next trips will lead me into some other direction (Czech Rep. maybe?... It'll definitely be cheaper ^^).

And now I'm off to the second cabled glove and anxious to start my first socks as I know know how to use dpns! (*^-^*)
Posted by Brahdelt at Saturday, April 01, 2006